For the first time in three years, three SEF's incentives are available to startups at the same time,

For the 12th year in a row, Technology Park has been the venue for the main promotional event of the spring start-up support programme, enabled by the Slovene Enterprise Fund (SEF), the Ministry of Economic Development and Technology and the SID Bank's Fund Sklad Skladov. In Technology Park's fully packed hall Mateja Grobelnik and Nina Urbanič from SEF presented details of the current tenders P2, SK75 and SI-SK, Urban Lapajne from Start: up Slovenia explained in all the details the content and mentoring support programme, which aims to further help the recipients of financial incentives to redeem them as effectively as possible. There were also entrepreneurial lessons, which were shared by eight interesting speakers.

636 companies were supported by the tender P2 so far

The P2 tender, which enables early-stage companies to obtain 54.000 euros of grants for product development, has so far supported 636 innovative companies with global growth potential. A total of 35 million euros were allocated, and Mateja Grobelnik was proud to say that 80% of the companies receiving these incentives are still commercially active. She emphasized that the purpose of the incentive is to bring the company from idea to its realization on the market within three years, and for companies, after signing the contract with the SEF, it is obligatory to choose a mentor, certified by the Fund, who will watch over the company throughout its development. 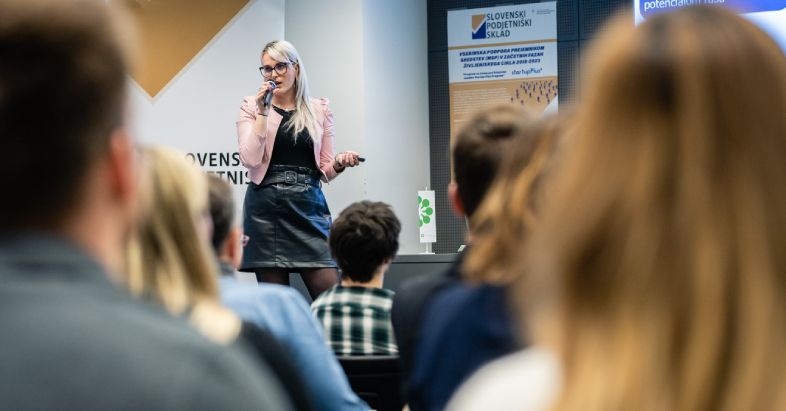 Mateja Grobelnik from the Slovene Enterprise Fund presented the P2 call for the non-refundable startup incentive.

Just like in the last year, companies will not need to prove for what they used the money for the second and third tranches. The Fund will only check the milestones for each of the three tranches, which are specified in the call for proposals.

If the P2 tender is distributed to companies over three years, the SK75 tender, which allows companies to obtain 75.000 euros of a convertible loan at a 4% interest rate, is completely different. Nina Urbanič explained that till seven months after the approval of the tender application, the entire amount is paid to the companies. The tender is intended only for companies, which are organized as a limited liability company but are already generating first sales revenues on the market, although their amount is not determined. This year, the Fund will support 15 companies with the deadline March 27.

The SK75 tender is intended for companies that are already generating their first sales revenue on the market, said Nina Urbanič.

Nina also pointed out that it is not possible to apply for both tenders in the same year, but it is possible to apply for P2 in one year and SK75 in the next. This is even a desirable route. She pointed out the E-forma company (which operates the DaiBau - MojMojster online platform) as an example of good practice as they successfully obtained funding year after year on all three tenders: first at P2, then at SK75 and finally the co-investment of the private investor and the Slovene Enterprise Fund SI-SK.

"We are still witnessing a high proportion of businesses that have poorly explained what they do and what problem they solve. Good preparation for the presentation is really important."

The latter enabled the co-investment of the Fund upon the prior acquisition of an independent private investor. In this case, the fund doubles the private investment in the range from 100.000 to 600.000 euros. 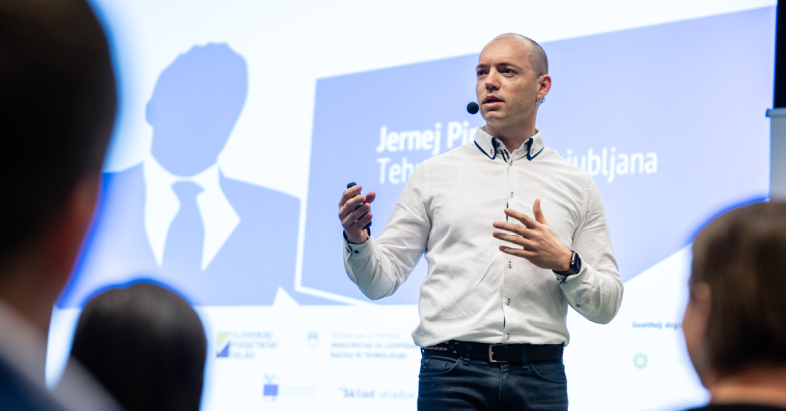 Urban Lapajne from Start:up Slovenia presented in detail the pre-selection procedures for P2 and SK75 tenders.

For P2 and SK75 tenders, the pre-selection procedures are underway at which companies can earn up to 35 points (in case of P2) and up to 40 points (in case of SK75) out of a total of 100 possible. "Last year we saw over 150 presentations at P2 Demo Day, with an average rating of around 23. "We are still witnessing a high proportion of businesses that have poorly explained what they do and what problem they solve. Good preparation for the presentation is really important. ”Urban emphasized.

Presentations from the event, content templates for P2 and SK75 pre-selection 2020 together with evaluation criteria can be found on the SlideShare profile of Start: up Slovenia.

Money alone is not enough to succeed on the market

Before an interesting lecture by experienced business mentor Matt Mayfield from Telekta, Urban Lapajne presented to entrepreneurship eager crowd of more than 150 individuals, 10 specialized content support programmes for companies within the Startup Plus Programme, implemented together with the best private contractors: Business Angels of Slovenia, CEED Slovenia, ABC Accelerator, CorpoHub and others.

The content programme is implemented in the fall and is aimed at all recipients of the Fund's financial incentives adapted to the company's growth stage. Programmes and mentoring are offered to companies in a bundle with financial support, and their goal is to further support knowledgeable businesses. 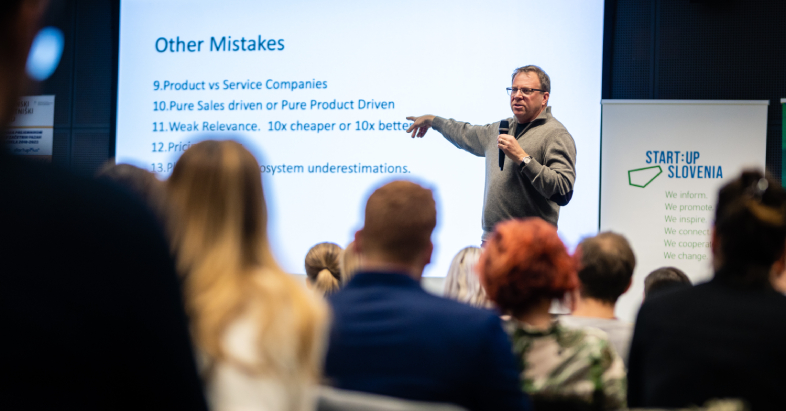 Matt Mayfield is one of the most experienced and active mentors in the Slovenian startup ecosystem.

Content support programmes include Push2start for market entry in the initial stages, SKstart, an intensive accelerator programme for global business growth, Startup Clinic run by Business Angels which are healing the most acute company wounds in various areas, then SK Growth Camp, two big investment conferences - Podim and Next+round conference, KorpoStart programme for all companies whose business is closely connected with corporations, and last but not least, the INTL programme and individual support for entering the global market.

Indirect sales channels distance you from the buyer

One of the most active mentors in the Content Support Program, Matt Mayfield, revealed to the Forum participants 10 of the most common mistakes made by companies in various stages of growth. One of these is sales through distributors and partners. Matt says distributors sell in the shortest way possible. If sales are not going well, they are not concerned with where the problem is. They do not explore the solution itself nor the market. They explore their relationship with the customer. A startup does not need this in the initial stages. A startup needs contact with the end customer, who can give him feedback on the product and develop a product that meets the customer's needs. A direct connection to a customer is increasingly paying off, Matt concluded.

Every entrepreneur wants to sell their product or service from the very first day of their business life but rarely succeed at this. Maja Voje, a growth hacking expert and an active mentor for the Startup Plus Programme, invited four successful entrepreneurs to the stage. These were Rok Matjaž from 4fun, who developed the Printee application for easy photo printing right from the phone, Rihard Jarc, who developed a Typless solution for identifying data from physical receives, Sandra Šuc, who has a collection of Women's sports leggings, sold under the brand name Alpine Princess, and Nick Žujo, who developed a special elastic band and workout that strengthens the muscles of the legs and buttocks, called Peach Booty Plan with his partner, Eva. 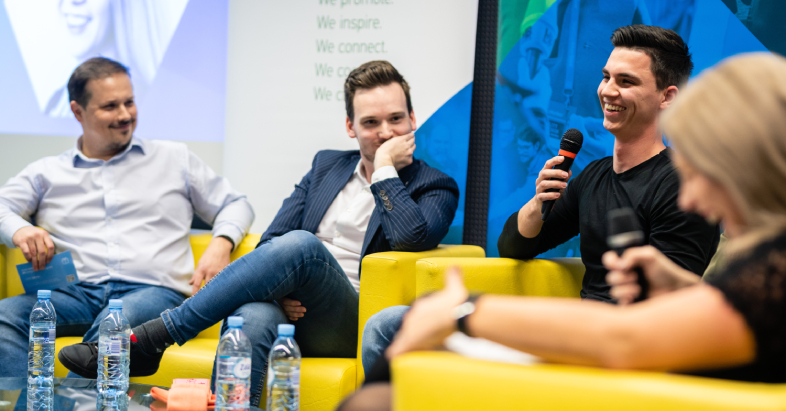 Rok Matjaž, Rihard Jarc, Nik Žujo and Sandra Šuc have been guests of Maja Voje in an interesting panel on sales success since basically their first day of sales.

Rok, Sandra and Nick have been building their brand recognition through social networks, specifically through Instagram. Collaborations with influencers have brought many sales to everyone, but to Sandra also abroad. The return of input for this type of marketing is as high as 95% in the Peach Booty Plan case, said Nik.

Richard, addressing the B2B market, picked up an old and proven tactic - the phone. The team found that most of their users were using ad blockers, so advertising was out of the question. All members of the team browsed their contacts and contacted all the acquaintances employed by companies that could be their final customers. Thus, they gradually obtained the contacts of business decision-makers and to date have managed to conclude a transaction with all major accounting and fintech companies in Slovenia. Interestingly, they access markets abroad through Twitter, where they are achieving enormous growth.

Sandra and Nik were delighted to announce that they had sold their first stock of products before receiving their new shipment. Nick, who sold 100 pieces of his tapes in the first week, collected first orders through a Google Form and set up an online store later.

According to Sandra, sports leggings were selling fast, because she had many followers before she founded the company and systematically built her community, which has more than 41.000 followers on Instagram today. Her users are brand ambassadors who, from the very beginning, have been sending photos of themselves, writing posts and tagging Sandra's profile. This content is crucial for both parties: existing customers feel more connected to the brand and new customers see a group of satisfied users.

You don't understand the market until he slaps you in the face.

Tjaša Sobočan from CEED Slovenia asked three successful entrepreneurs about the Challenges of Global Growth, in the last panel of the Forum 100% Startup. These entrepreneurs were: Mic Melanšek from Hooray Heroes, who received the prestigious Slovenian Start-Up of the Year last year and recorded a million sold a personalized book for children, Marko Bitenc from GenePlanet, a recipient of P2 startup incentive and today a global company, present in more than 35 markets and with millions of revenue, and Tomaž Isaac from Blue Planet, a P2 incentive and SK75 convertible loan receiver, developing a solution to capture aerial data for surveyors.

Hooray heroes generate more than 50% of their traffic in America today, while their first attempt to enter the US market almost buried them. Mic admitted that he and the co-founder, Rado Daradan, had been attracted to this market from the beginning, but they took it too easily. As a reason for the failure, Mic mentioned the underestimation of the value of money in foreign markets, the lack of delivery systems, the maladaptation of the product to the market. However, without the first defeat, there would not have been so much success in the second try… 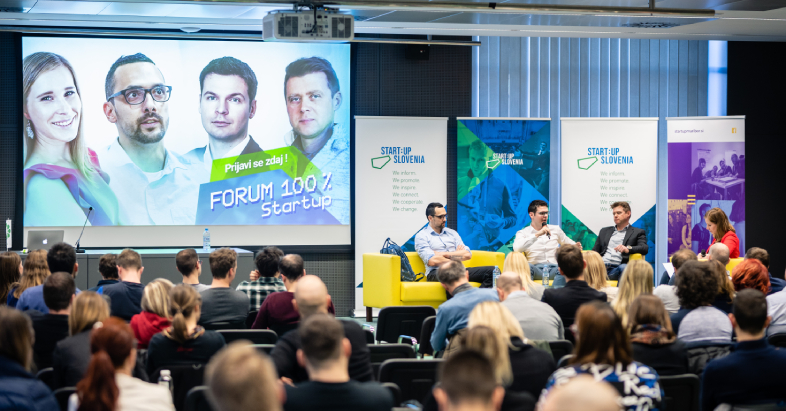 Marko Bitenc, with a team, which increased by 105 members last year and includes about 170 people now, has been actively conquering Asian markets in recent months and is testing the African markets. He says each market is different. There are so many specialities in Europe alone, so every market must be built from scratch. At the same time, he admits that the team is conquering new markets with even more courage than in the past. They no longer study the new market, but "attack" it to the full and learn about it at the same time. Otherwise, they would lose too much time in their aim for at least 50% annual growth of the company. His thinking was confirmed by Mic saying: You don't understand the market until it slaps you in the face.

The Blue Planet could not even market its product on the domestic market due to the legislation that came into force at the time they started their company. They spent some time with the service, and then entered Croatia. The largest international fair for surveying instruments offered them the perfect stepping-stone for new markets. They gained key contacts and entered Germany first, then the United States, and today their distribution network has around 45 members worldwide.